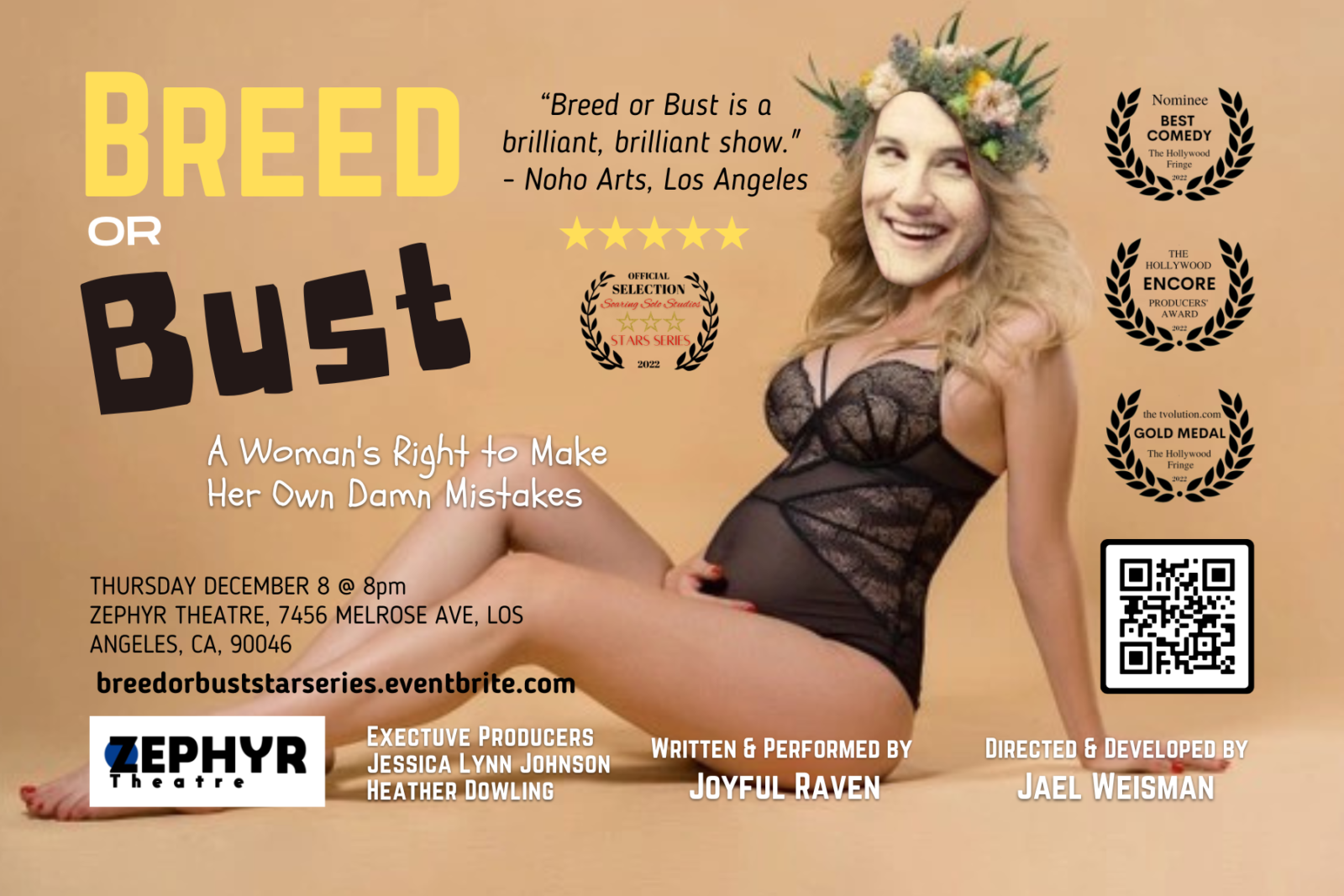 Breed or Bust debuted in January, 2022, at The Potrero Stage in San Francisco as part of PlayGround’s Solo Performance Festival. PlayGround presented the show again for a successful, three-week run in September, 2022. Breed or Bust was a multi award-winning solo show at the Hollywood Fringe Festival in Los Angeles in June, 2022. It received a Producers Encore Award and a Gold Medal from The TVolution. It was nominated for Best Comedy from over 200 festival shows.

With her unique style of standup comedy, dark humor and unabashedly honest storytelling, Joyful Raven navigates the complexity of modern womanhood with a nuanced perspective on a woman’s right to choose. She recounts her difficult reproductive choices and contends with her primal baby making instincts.  With her breeding window rapidly shrinking, she reflects on her abortions, the father of her abortions and the complexity of modern womanhood. Come for the laughs and stay for the sex education…in case you forgot how babies were made.

What the Press is Saying

“I can’t remember the last time I loved every minute of a production, but I did for this one. I’m telling my friends to go. We all need to laugh. Energetic and confiding, Raven engages us from the get-go.  We learn her background growing up in a commune of hippies. We learn of her early carefree artist’s way of life. We meet the boyfriend.  Then those two damned little blue lines show up on the pregnancy test, and her carefree life turns intense.” – Kim Waldron, Theatrius

“She tells it openly, without self-pity or sentimentality. And she tells it funny.” – Jean Schiffman, SF Examiner

“Raven is a brilliant and gifted storyteller and performer.  Using her genius whit and incredible stage presence, she talks us through the experiences of her abortions, the good and the very bad, what led to them, how she feels about them now, and we come away understanding all of it.” – Samantha Simmonds-Ronceros, Noho Arts, Los Angeles

“Raven’s …forthright and direct approach to story-telling, with its heightened sense of honesty and effortless infusion of humor creates a sense of intimacy with an audience…which makes for a very frank and very funny evening.”  – Ernest Kearney, The TV Olution, Los Angeles

“… heartbreaking and deeply heartfelt, taking a serious subject and offering an often humorous look at what women go through when it comes to breeding decisions. It’s a difficult subject, and Joyful made it an easy one to watch.” – Shari Barrett, Broadway World, Los Angeles

BREED OR BUST in The Soaring Solo Stars Series at the Zephyr Theatre!