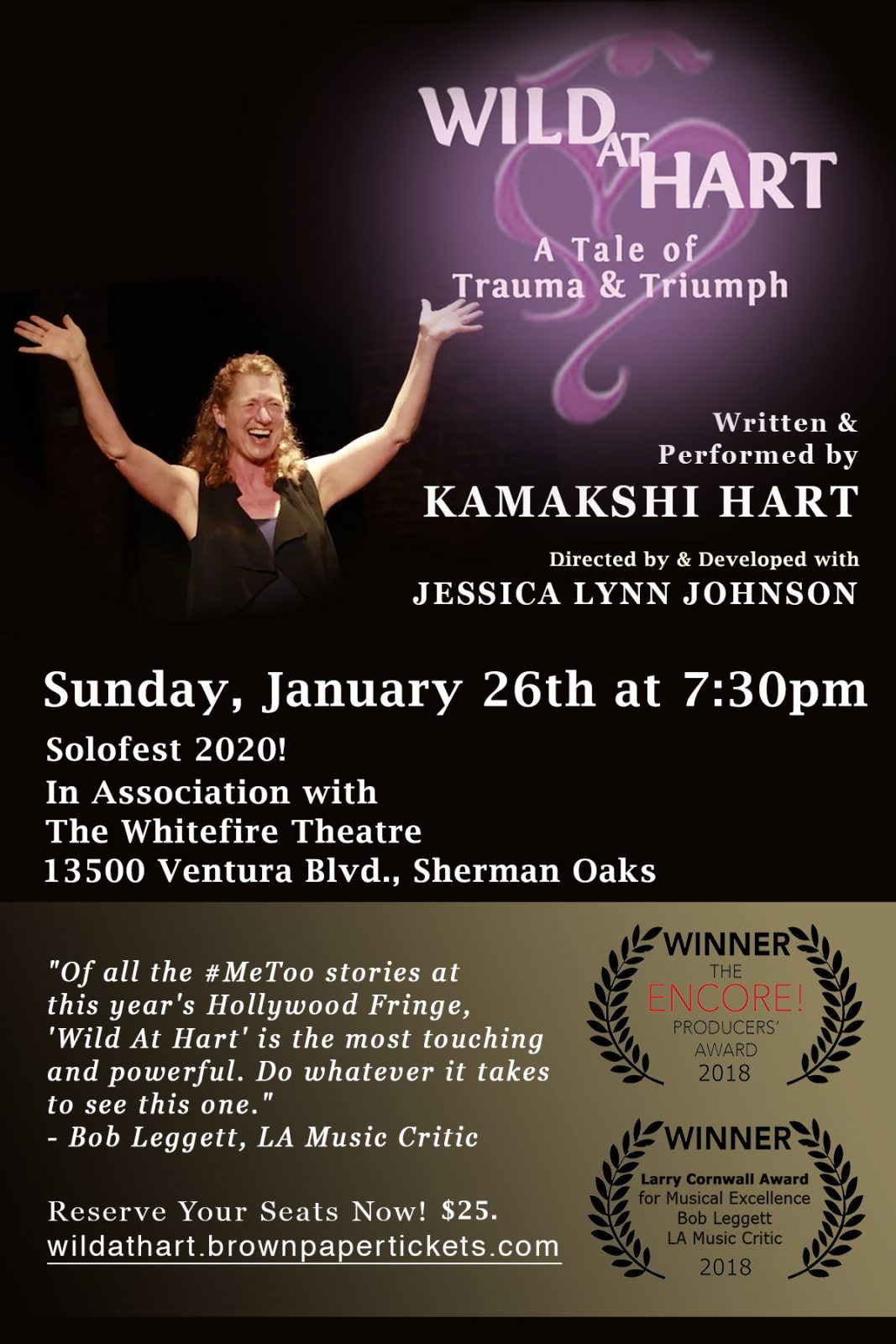 ‘Wild At Hart’ is an award-winning, highly acclaimed, inspiring example of the power of solo theatre to uplift, heal and transform. Premiered at the Whitefire Theatre’s Solofest 2018, invited back for 2019 and now 2020! Official selection of the Santa Monica Playhouse Binge Fringe Festival 2018 with an encore performance in their 2019 Benefit Series. ‘Wild At Hart’ was featured by the 2019 prestigious Los Angeles Women’s Theatre Festival and honored at the Hollywood Fringe 2018 with an Encore Producer’s Award and the Larry Cornwall Award for Musical Excellence. Kamakshi’s one-woman play deeply engages the audience while striking a timely, powerful chord for all ages (mid-teen and up) and genders. Moving and miraculous, Kamakshi’s wide range of talent is showcased through her performance of 25 characters and the songs that masterfully tell her personal tale of transformation. Urged to bring her story to the stage by the advent of the #MeToo and #TimesUp movements, all members of her audience regardless of background have identified with the central character of Shame. ‘Wild At Hart’ is a testimony to the power of healing and the building of resilience and empathy through the telling of and listening to our stories.
Written & Performed by Kamakshi Hart
Directed By & Developed with Jessica Lynn Johnson
Festival Executive Producer Bryan Rasmussen
Festival Associate Producer Nancy Santiago
Technical Director Brandon Loeser
“The show is transformational. It is brave and heartfelt, honest and hilarious, knowing and knowable. It is far more Us Too than Me Too. This show is performed from time to time and I can only urge you to see it if you can, it will change you…in a good way.” – Samantha Simmons-Ronceros, Noho Arts
“Of all the #MeToo stories at this year’s Hollywood Fringe, ‘Wild At Hart’ is the most touching and powerful. Do whatever it takes to see this one.”  – Robert Leggett, LA Music Critic/Indie Voice

WILD AT HEART at SOLOFEST2020!