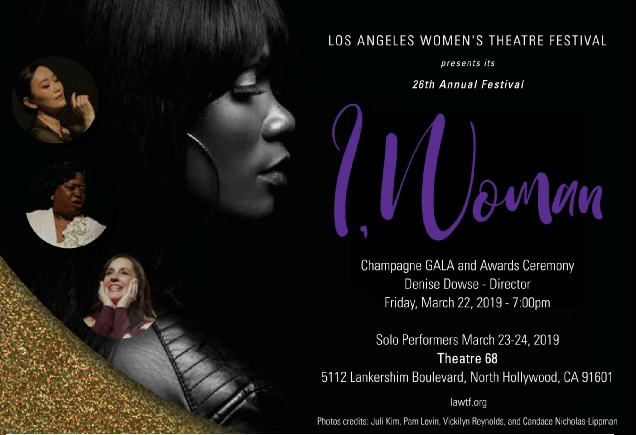 This dance excerpt celebrates Yma Sumac, the only Peruvian woman bestowed with a star on the Hollywood Walk of Fame.

This male dance represents the carefree lifestyle of the “Royal Blood” wealthy class in Ancient Korea.

This excerpt of the musical play gives a glimpse of the first African American to receive an Oscar in Hollywood.

This comedic personal story gives an honest perspective of the hardest job in the world, PARENTING!

Paying homage to her Jewish immigrant grandmother from Russia, Vicki follows one woman’s journey to America.

A breast cancer diagnosis forces one woman to confront such issues as mortality, body image, relationships, fertility and mental health.

“ONE VOICE, MANY  STORIES”

Karen A. Clark (The Women)

LAURA BIAGI (“The Breath of Self-Love”)

This piece explores longing and belonging of an immigrant woman living in Chicago.

A biracial little girl’s journey to womanhood explores her uprooted confidence and vulnerability in a story centered around family, race and identity.

“Squirre!!!” follows a quirky, nutty, girl as she fearlessly confronts her battles with ADHD, while facing the unbearable challenges of adulthood, LGBTQ issues and suicidal ideations.

Jude Narita (Coming Into Passion/Song for a Sansei)

DEBRIANNA MANSINI (“The Meatball Chronicles”)
As the dough is kneaded and the sauce thickened in Italian recipes, so too is the complexity of childhood, family and relationships in this culinary journey.

CANDACE NICHOLAS-LIPPMAN (“A Rose Called Candace”)
This unvarnished story of family, faith, fear and freedom is a testament to one woman finding truth and transformation along the way.

JULIA VALLY (“Mal Coupé”)
A young girl grows up with a dream of becoming a prima ballerina but is unable to reach the standard of perfection that the classical aesthetic demands, causing her to spiral downward.

This thought-provoking dance piece gives voice to how a young man’s death breathes new life into a mother, community and society shattered by gun violence.

The deeply expressed songs “I Am Enough” and “Rise Up” speak words of empowerment and encouragement.

This is a brave story of transformation and triumph from the ravages of trauma, depression and abusive relationships.

JULI KIM (For Those Who Dream)

This dance is a tribute to beauty in the midst of finding resiliency in the human spirit.