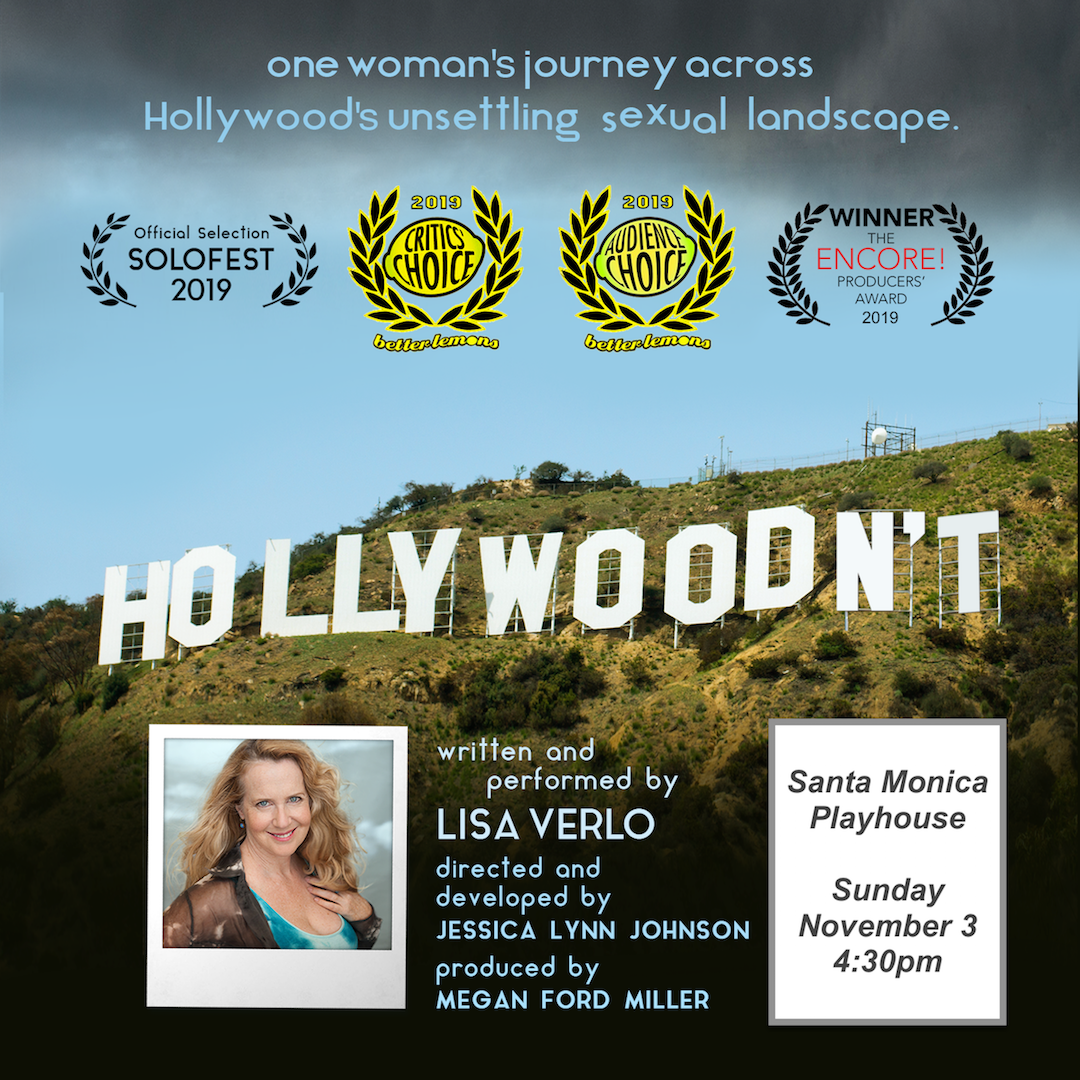 HOLLYWOODN’T is Lisa Verlo’s solo show and personal journey across Hollywood’s unsettling sexual landscape. Directed by and developed with Jessica Lynn Johnson, it is a musical memoir told with candor and insight into the life of an actress before women dared to speak up. With original songs co-written with Frank Simes, Musical Director for The Who, Lisa Verlo brings humor and a light heart to a heavy subject. Creative visuals and video projections add to the multimedia recounting of her experiences on the casting couches of LA.

Lisa Verlo is a writer, performer, and lyricist whose songs have been featured on film and TV. Lisa explored a landscape of poetry, art, and music while driving across the US in a blue Westfalia. After recording albums of spoken word and song, Lisa settled in a canyon on the West Coast, and teamed up with composer and musician Frank Simes collaborating on and creating musicals. Verlo and Simes staged their original musical The Door at the Sierra Madre Playhouse. Lisa has performed her one woman show Sex Rated G at the Edinburgh Fringe Festival in 2015 and the Hollywood Fringe Festival in 2018. HOLLYWOODN’T, directed by and developed with Jessica Lynn Johnson, is a reworked exploration of Sex Rated G that delves deeper into the gray area of sexual harassment. HOLLYWOODN’T was featured at the Whitefire Theatre as part of SOLOFEST 2019, the largest solo theatre festival on the West Coast and then went on to do a successful run at the Hollywood Fringe Festival where it won an Encore Producer’s Award, and a Larry Cornwall Musical Excellence nomination.

“She has that rare gift of connecting to the audience on an almost cellular level. She is fierce and brave and wise and absolutely hilarious…Bravo!!!”
– Samantha Simmonds-Ronceros – NoHo Arts Disctirct

“She speaks candidly about sex and her own sexuality. Although the subject of abuse is no laughing matter, Lisa’s use of body language (and “talking” body parts) keeps the audience enthralled.”
– Laura Voeth – Tolucan Times

“Lisa Verlo handles the challenging material with depth and humor. The witty writing and her ability to play different characters with very different accents was impressive… entertaining from start to finish!”
– S. Curtis – Acting Teacher and coach, Los Angeles

“Lisa tells her Hollywood story of sex, innuendo and unhinged promises with wholesome candor, whimsy and irony. What she sought and what occurred… is carefully articulated… sparing the rancor for a brainier approach. She’s ON! And her work has the ring of Truth.”
– Elizabeth Converse – Art Critic, Los Angeles

Sex Rated G… has a message for any woman with a pulse who has been in the “world.” …Ms. Verlo’s candid, unflinching look at how her looks were keys to the kingdom and also, the source of suffering.  It’s heartfelt, full of talent and it’s a pleasure to see Verlo’s acting chops, which are considerable. Hollywood’s loss is our gain.
– Ellen Snortland – Columnist, Pasadena Weekly

For Reservations call 310-394-9779 ext. 1 or Email theatre@santamonicaplayhouse.com
with show title, name for will-call, phone number, and number of seats

This show is a part of A BFF Binge Fringe Festival of Free Theatre Event.

HOLLYWOODN’T in the BINGE FRINGE FESTIVAL!!!