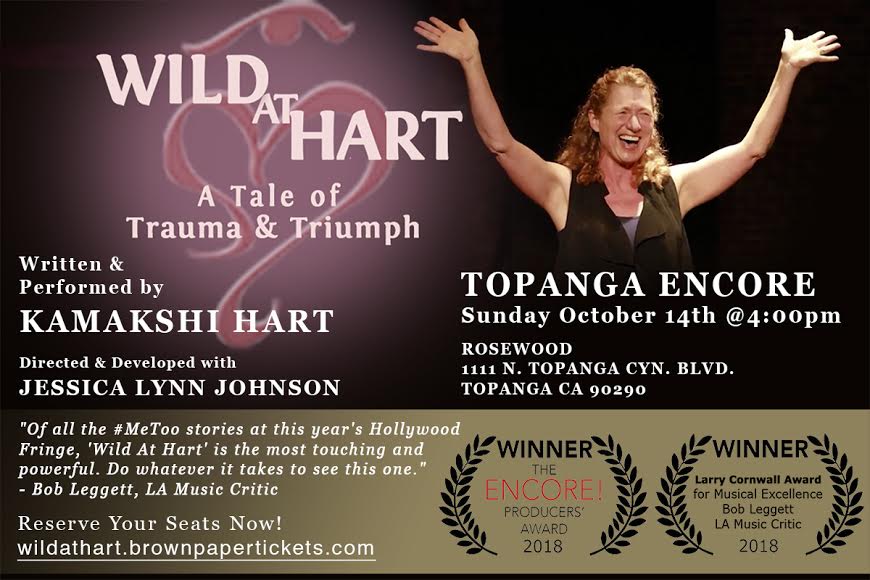 Honored at the recent Hollywood Fringe with an Encore Producer’s Award and the Award for Musical Excellence,Wild At Hart deeply engages the audience while striking a timely, powerful chord for all ages and genders.

A sexual trauma survivor’s sojourn from suffering to sovereignty, this is a story of triumph over the ravages of childhood trauma, teen rape, depression, violence, and abusive relationships. Moving and miraculous, Kamakshi’s wide range of talent is showcased through her performance of over 20 characters and the songs that masterfully tell her personal tale of transformation.

“Kamakshi Hart has a beautiful voice, whether chanting her mantra or singing out show tunes. Her story, although full of pain and trauma, is told so beautifully that the audience can’t help but be uplifted by her unquenchable spirit and her ability to triumph over that tragedy.” Robert Leggett (Indie Voice Blog)

WILD AT HART Encore in TOPANGA & the BINGE FESTIVAL!