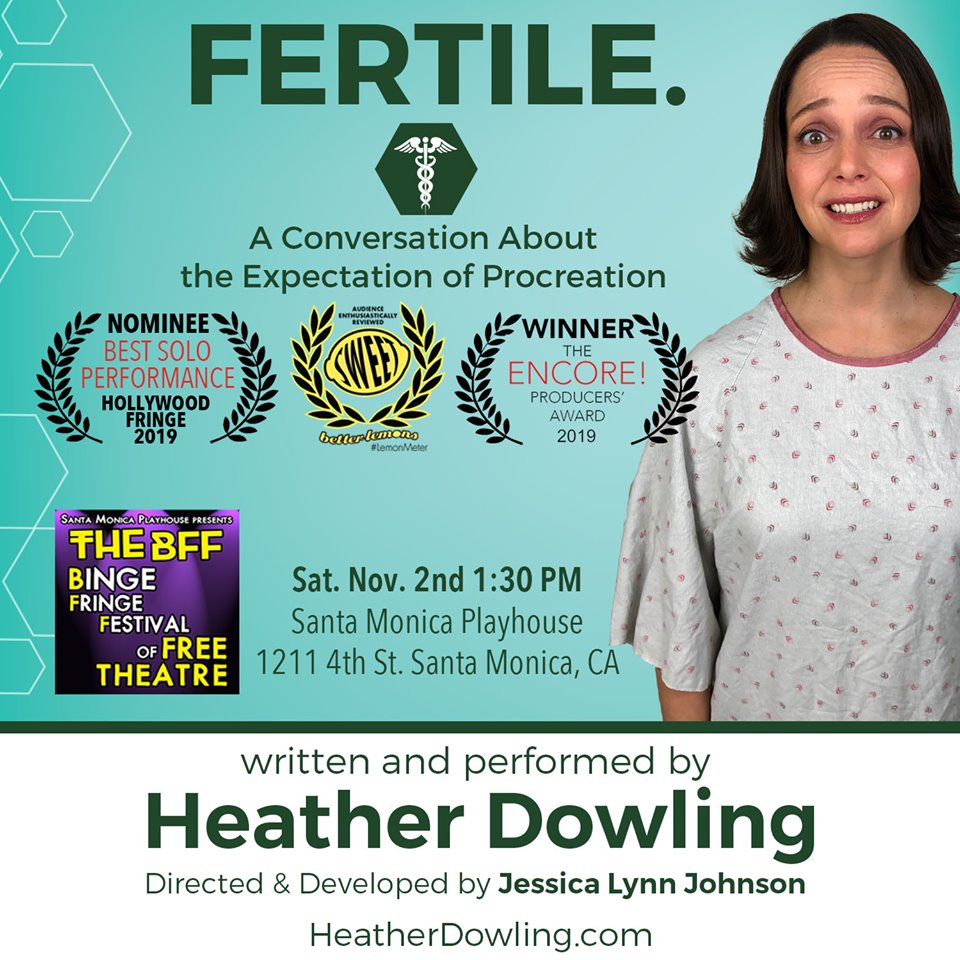 Jenny has a plan. A plan to get pregnant. Everyone keeps telling her that time is running out, she just turned 35, after all. So, when those pesky urine tests keep coming back negative, Jenny decides to take action and fix the problem. That’s when she runs into real problems and real questions about fertility and motherhood. As Jenny faces the world of “mom options” – egg freezing, in-vitro, adoption, and more – the conversation about the expectation of procreation really begins. Taking into account a whirlwind of outside opinions from her mom, her friends, doctors, a beloved neighbor – and even God – Jenny must ultimately look within to discover what motherhood means to her, what it means to be Fertile.

Heather Dowling (Playwright & Performer) is an actress and writer who impersonated someone who wanted a “real job” since the age of 14. In her first award-winning solo-show UNEMPLOYED. FINALLY, she brought 39 characters to life and made it all the way to 42nd Street, New York City for United Solo – the largest solo theatre festival in the world. It was during the two-year run of UNEMPLOYED. FINALLY. on stages all over Los Angeles that her second show, FERTILE, started to percolate. One of the moments people responded to most from UNEMPLOYED. was Dowling’s personal story of challenges with fertility. Driven by the heartfelt audience response, Dowling decided to share her story more completely and interviewed dozens of women – and men, too – to discover, uncover and encourage a conversation about procreation as an empowered choice. HeatherDowling.com

Jessica Lynn Johnson (Director & Developer) is a published playwright, recipient of BEST NATIONAL SOLO ARTIST AWARD, Board Member of the LA Women’s Theatre Festival, Director for Whitefire Theatre’s SOLOFEST, and Founder & CEO of Soaring Solo LLC. Jessica works as a full time Director & Developer of solo theatre having aided in the development of over 75 solo shows (and still going strong)! As a performer, Jessica has edu-tained international audiences touring her own 25 character one person shows ZE and OBLIVIOUS TO EVERYONE for over 13 years. Over the years, Jessica’s projects have taken home awards such as TOP OF FRINGE, HFF ENCORE PRODUCER AWARDS, TVOLUTION BEST SOLO PERFORMANCE, LARRY CORNWALL AWARD FOR MUSICAL EXCELLENCE & several other accolades! Jessica was most recently nominated Female Director of Distinction in Theatre by Girl Trip LLC at the 2018 Hollywood Fringe Festival. She is honored to be a Guide on Heather’s solo journey for the 2nd time around! JessicaLynnJohnson.com.

FERTILE in the BINGE FRINGE FESTIVAL!!!