Oblivious To Everyone: A Schizophrenic Media Mania!

Jessica Lynn Johnson, awarded BEST NATIONAL SOLO ARTIST by the Dialogue One Festival, has toured internationally with her solo shows for nearly a decade. Oblivious to Everyone was published in The Book of Estrogenius 2008, and is a 1 woman, 10 character dramedy centering around Carrie, a media junkie, who has developed multiple personalities due to her unhealthy obsession with American pop-culture. Rapidly flipping identities like TV stations, this LA bombshell grapples with issues of homophobia, sexism, racism, and materialism. Johnson uses comedy as a means to examine the influential stereotypes, prejudices, and pressures prevalent in American media.

ZE: a Thirty Year Old Virgin’s Quest for Healthy Sexuality from A to Ze! 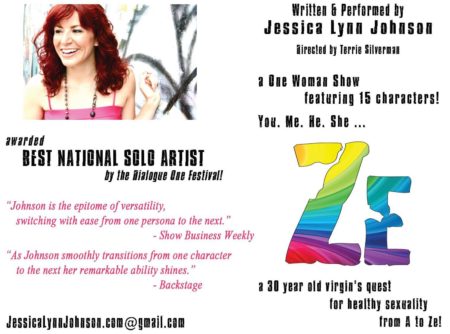 Johnson’s 2nd solo show Ze has toured Universities nationwide and has been seen at the Out North Contemporary Art Space in Alaska, Matthew Corozine Theatre in NYC, the LA Women’s Theatre Festival, Level Ground Festival in Pasadena, and many other festivals all over the country. Ze is a 1 woman, 15 character dramedy that examines gender construction, sexuality and spirituality, and many other issues regarding the LGBTQ community. The piece centers around Tessa, a 30 year old virgin, who is in love with her Transgender best friend, but is in deep turmoil over her feelings due to her religious upbringing.